If you haven’t tried the modern approach of handling swift concurrency in your application yet, here we are with the example app which does the most popular things that your application for sure does and which may be helpful for you to see how the syntax looks like and how it works in action.

The application is based on the NASA API which allows displaying the APOD (Astronomic picture of the Day) using SwiftUI components. You can also add the pictures to locally stored Favorites. 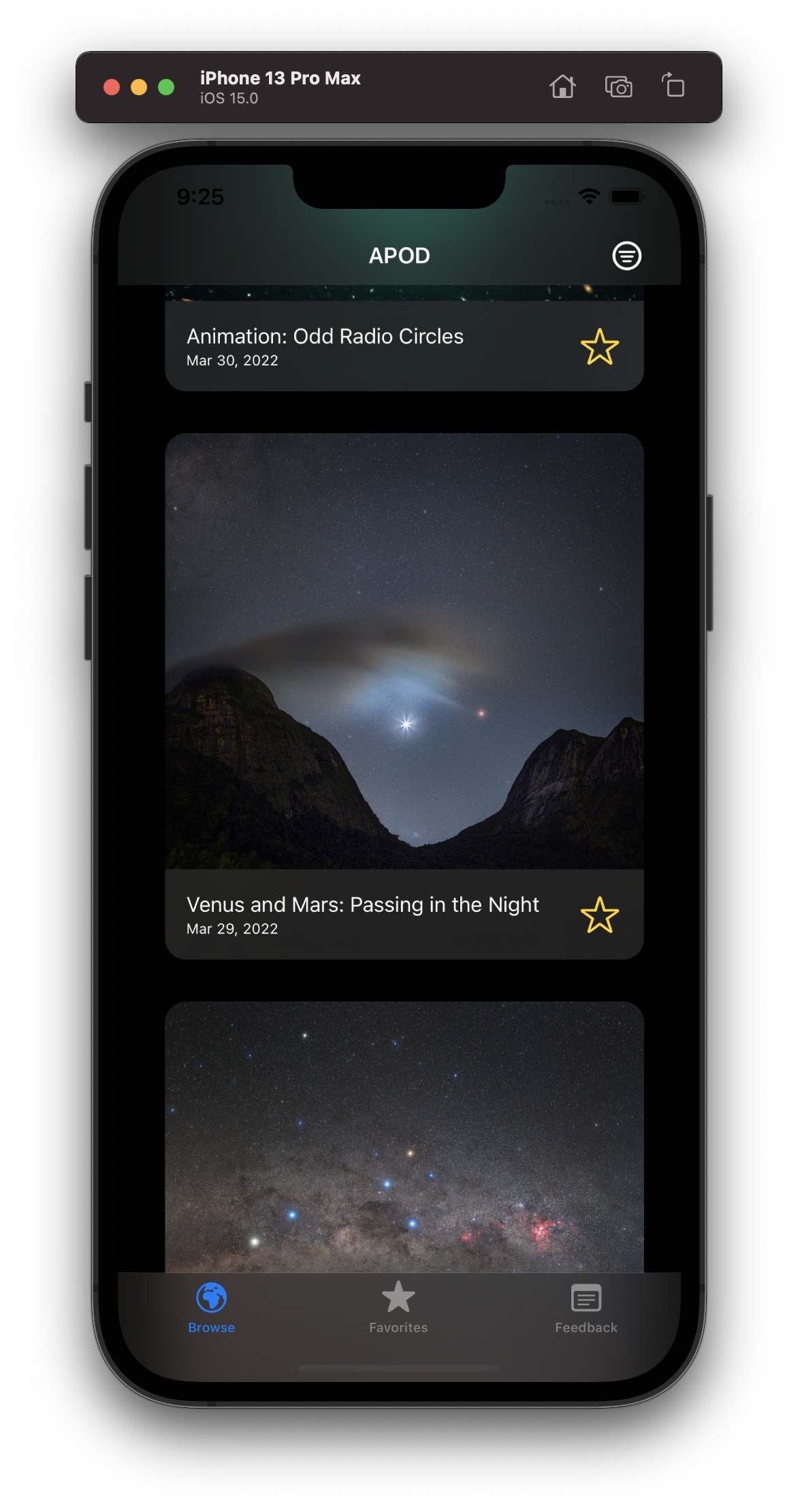 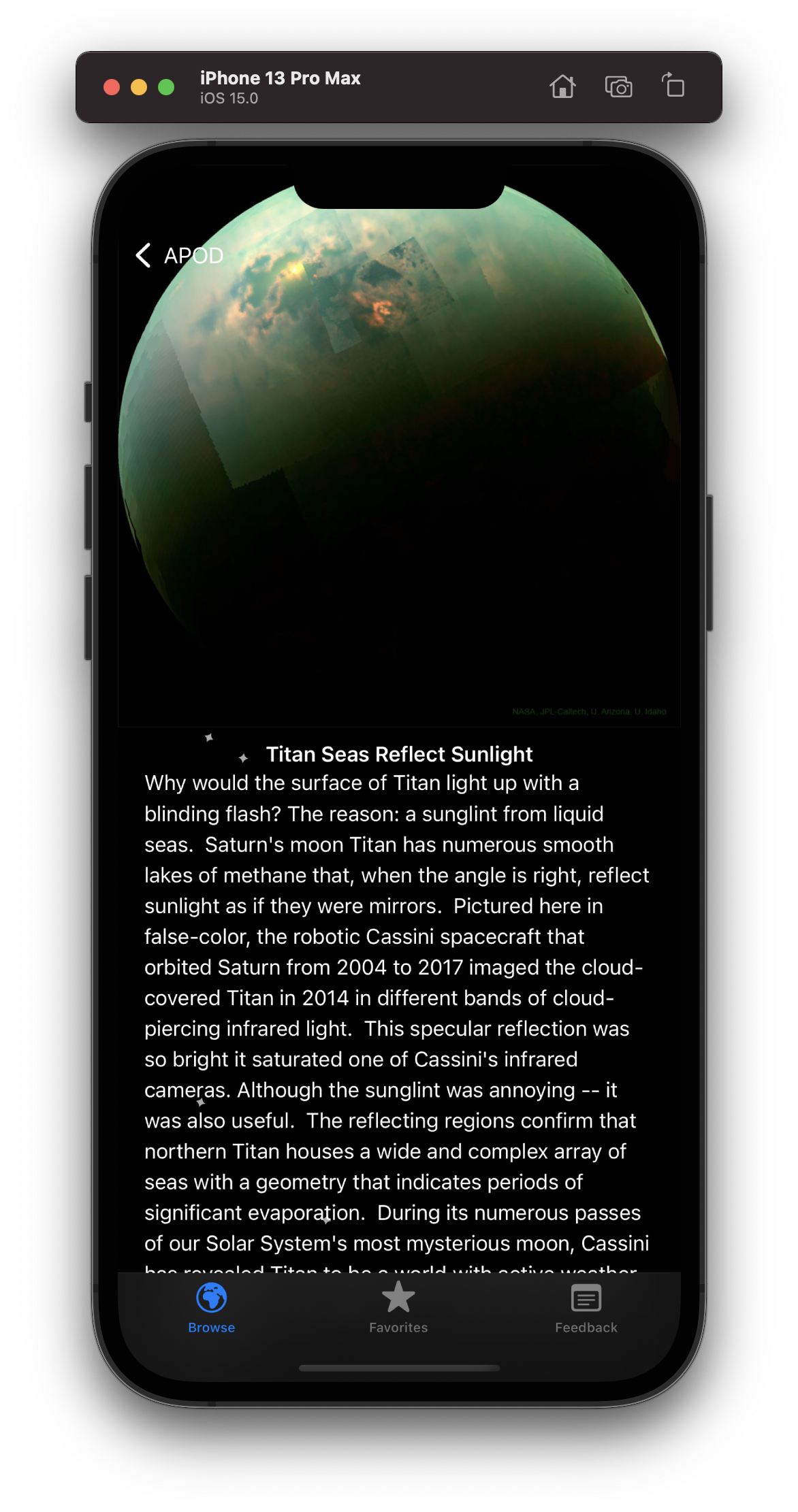 Please find the Github repo under this link.

In the below sections we will give you also some more context for our code. So the examples below will rely on our app. But no worries, those examples do not require you to know the whole codebase :)

The new async/await syntax is really straightforward. All you have to do is use a new API call on URLSession which is let (data, response) = try await URLSession.shared.data(from: url). The await keyword is how you notice that a block of code doesn’t get executed as one transaction. The function may suspend, and other things may happen while it’s suspended between the lines of the function. More than that, the function may resume onto an entirely different thread.

The full function which fetches the APOD data in the Networking layer in our case looks like this:

As we used the try await URLSession.shared.data(from: url) we had to mark also the function as async which would inform the compiler that this method is asynchronous.

Since our networking does also the parsing part (try decoder.decode([ApodModel].self, from: data)), we decided to put this function as a part of an actor, which is ok since from our observation now everything done within the function will be executed on a background thread, not main.

So the API overview of our networking layer looks like this:

Now saving the data to the persistence after fetching them from the network is very clear for the reader without any nested closures. You read it top-down as it executes.

What is an actor?

Is very important to distinguish two types of actors:

What could be an actor? Good candidates which can become actors are classes that possess logic not connected to the UI. So it can be for example part of the code responsible for:

Let’s look on the example from our application:

As above, if we define a new actor, that way we can make sure that all methods of that actor will be not run on the main thread, the access to the properties either. Actor helps us to be thread-safe (which we cannot guarantee in the classes without using some special mechanism like GCD, semaphores, locks, etc.)

In our app we marked ApodViewModel as a MainActor:

From the architecture point of view, this is a good candidate because is an ObservableObject, and accessing properties of this class should be as fast as possible because ApodViewModel is the source for our UI. In your application for sure, you have very similar patterns that you have a view model which contains collections that need to be reloaded on the main thread when synchronization (from other actors) ends. For sure it can be a potentially good candidate for MainActor.

Probably in your application, you don’t want to mark the whole class as the main actor, then you have two options:

Each APOD item on the list has its own image with a specific URL. Our goal was to trigger the fetch of all possible thumbnails at once in the background.

NOTE: Please note that if had 1000 elements on the list, all of the images would be fetched at once so it is not the desired goal for the application. The mechanism for fetching should be triggered lazily (eg. fetching the nearest 20 elements depending on the scroll position). But as an experiment for the Task Group let’s assume that it is completely fine :)

In addition, when there is a new thumbnail fetched, we want to inform UI about it to refresh the view and present the loaded images on the screen.

The best candidates to fulfill those requirements are:

So first of all - we start with creating the new data type which will perform all of this. Once again actor is a great choice since all of those things are not user-facing, so it should be done in the background. Let’s call it ThumbnailDataSource.

Great, now we define the function which will start fetching the thumbnails.

As a parameter, we take an array of ApodModels which contains the URLs for our images. Our function will return the AsyncStream, which will be delivering the tuple (String, UIImage) when the particular image is fetched (String will contain the image URL).

Now we create an AsyncStream using its initializer, which is given a continuation as a closure parameter, which we will use later on (more about AsyncStream). In short, the continuation is needed to inform the stream about the received elements or when the stream is finishing its work.

Please note that func getThumbnails() is not an async function, because we would like to only bind the data and receive them later on. That’s why all async code was wrapped as a Task. The nonisolated prefix gave a possibility for the function to synchronously create the AsyncStream in the code. Since we do not modify anything in terms of the actor’s properties in the function, it is safe to expose the method as nonisolated.

And then the usage of the Task Group looks like below:

Once added a child task to a group (by calling group.addTask()), child tasks are being executed immediately and in any order.

The continuation property yields the result every time the group task finishes its fetch. Once all of the data are fetched, we call conitnuation.finish() to inform that the stream has finished publishing data.

The binding in the parent would look like this:

Great, now every time we call fetchThumbnails(for models: [ApodModel]), all of the thumbnails for the passed ApodModels will be fetched in the background, by delivering fetched images one after another and populate the thumbnails dictionary.

As you may notice our view model (ApodViewModel) is responsible for fetching thumbnails and updating the UI when new thumbnails appear (via @Published var thumbnails property and ObservableObject conformance). It is marked as a @MainActor, which means that every update of the properties or actions within the functions will be called on the main thread. So in our case when the thumbnails are fetched - the UI will be updated from the main thread.

Now let’s focus on an improvement and think how we could in a better way present the data by sectioning and improve searching by section sorting. WWDC 21 introduced a new API (SectionedFetchRequest) which can help us with dealing with this task.

SecionedFetchRequest in action in our demo app

SectionedFetchRequest is used in our ListView for fetching Apod’s from our Persistence layer (Core Data):

here in the example, each section has items for a specific day. But what if we want to do sectioning by week, month, year, etc. ? Before we will do this, we have to answer the follow-up question: if we can section items by property not defined in the entity? Fortunately, the answer is: yes.

Let’s say that we want to have section per week or month (which are not enity properties), then we can add dynamic properties to the Apod entity, like for example:

Then we can use those properties as a section identifiers:

What is really cool is that we can change the sort descriptor and sectionIdentifier dynamically. It gives the possibility to change sectioning in the application based on the user’s choice. The only thing is to create the picker with a list of possible options (SortSelectionView) and then when the user chooses some option we reload the table with new sectioning by changing sortDescriptors and sectionIdentifier of the sectioned request.

Using SwiftUI Menu and Picker components we display the available sort options when user taps on a top-right toolbar button: 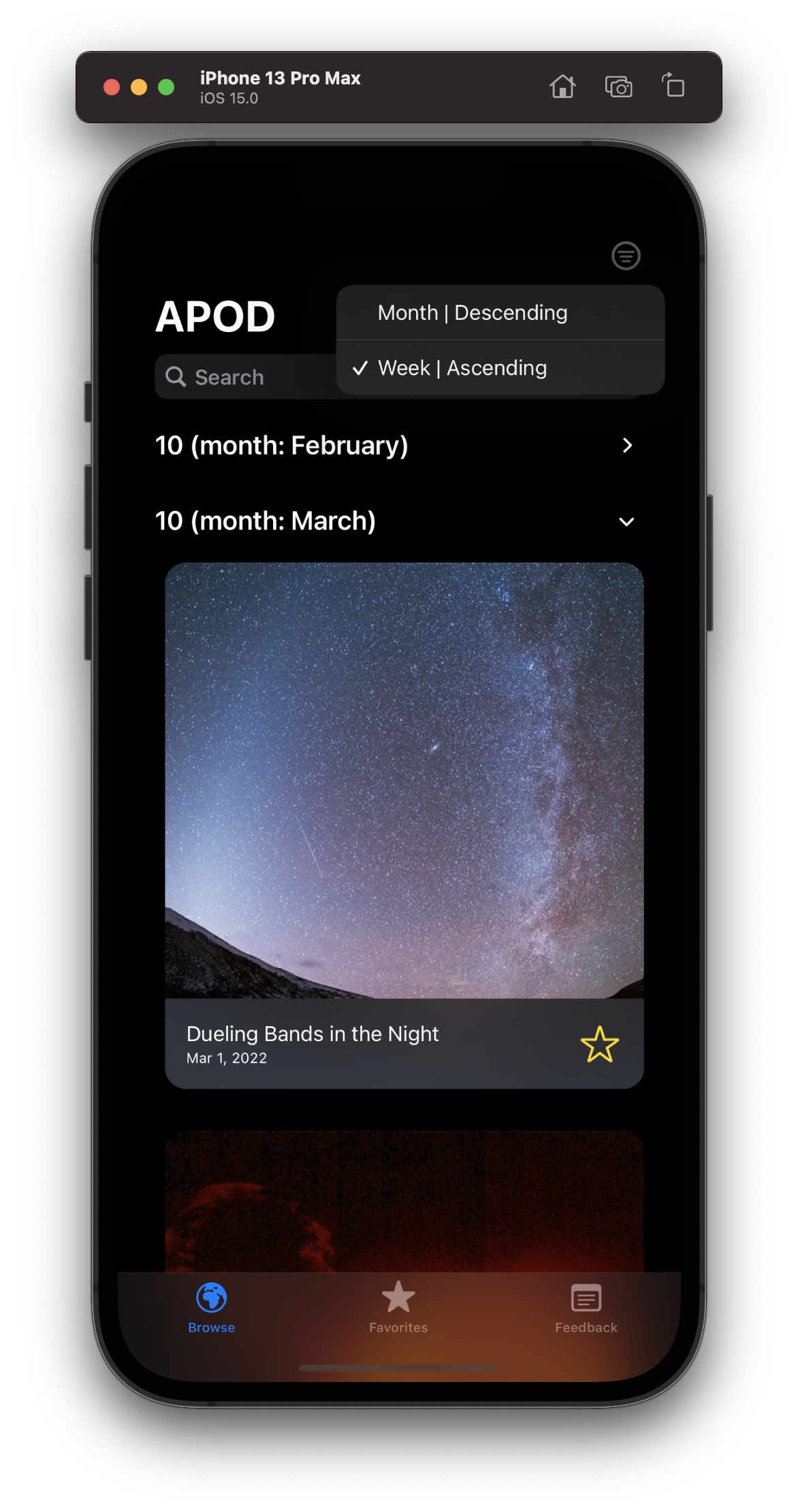 During creating the demo app we saw that we ended with no class (only actors and structs). What gives us ensurance that we are thread-safe. Of course, using actors doesn’t get us an ensurance that we will not have performance problems, so still, you have to really pay attention to what you have in the main actor. We also encountered some performance issues, but then we realized that some part of the code needs to be moved from the main actor to other actors which solves the problem.