After publishing this post and shared it via Twitter, on the next day we got a message from Rob Napier: Next I have contacted Rob, who helped me a lot with improving this post by pointing out main issues in the article and in the example project. I have to say that Rob helped me a lot with understanding security concepts by his feedback and his great knowledge. Big thanks to Rob Napier for that!!!

The article below contains improvements based on Rob’s comments. Updated sections are marked with red exclamation marks: ❗Updated❗.

I hope you you’ve had possibility to look at our previous post about security basics.

Today we would like to concentrate more on scenarios in which we want to strictly secure our sensitive data in our applications, with below assumptions:

In these cases it is good to consider implementation of own encryption scheme.

Note: You can find example project, based on snippets shown below, on my GitHub account.

Apple provides many different aspects of security. During development of your security layer don’t forget about crucial things like:

What does it mean to implement an encryption scheme? It means that we need to:

Is that all? Unfortunately not yet…

What would it mean if user wanted to change his password? It would mean that we had to decrypt and re-encrypt all of the user’s data if the password was tied directly to the encrypted data. Fortunately a better solution, which is based on using a master key concept, exists:

A master key never needs to change if it is protected at all times. When user wants to change his password, then the master key can simply be re-encrypted with the new derived key. Below schema shows process of changing their password in perspective of decrypting and encrypting the master key: 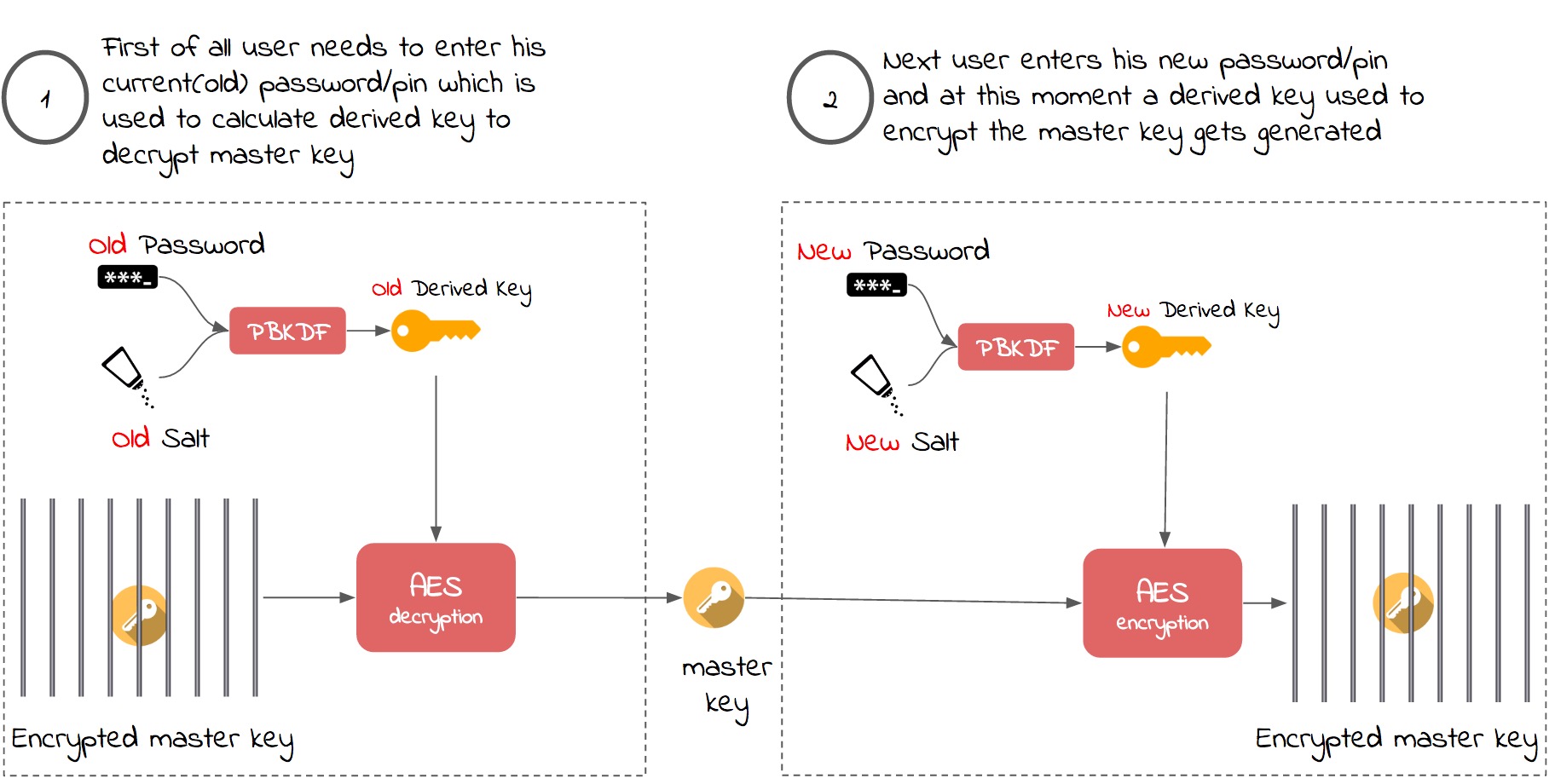 Finally, having the decrypted master key we can encrypt our data with an AES algorithm:

To create our own encryption, first thing we need is some user password or pin, which is used as an input to calculate a derived key. Using the password/pin as the only input to derive your encryption key can be brute-forced quite quickly. That’s why it is good to add some salt to calcuations.

Salt is just a random data. It is used as an additional input to a one-way function that “hashes” a password or pin. It is used to make brute-force and rainbow table attacks against your implementation computationally expensive.

Below example implementation of generating salt is based on proposal from The Mobile Application Hacker’s Handbook:

Here you can find more about the concept of salt.

PBKDF2 applies a pseudorandom function, such as a cryptographic hash, cipher, or hash-based message authentication code (HMAC), to the user input password/pin along with a salt value and repeats the process many times to produce a derived key, which can then be used as a cryptographic key in subsequent operations. The added computational work makes password cracking much more difficult, and is known as key stretching.

The Derived Key is an output of PBKDF2 function. In the concept shown on the pictures it is used as the encryption key in AES algorithm to encrypt the master key.

The Advanced Encryption Standard (AES) is a symmetric encryption algorithm that supports a block length of 128 bits and key lengths of 128, 192, and 256 bits. AES in most libraries use CBC mode by default, that is used generally in database applications.

Initialization Vector (IV) is an unpredictable random number used to make sure that when the same message is encrypted twice, the cipher text is always different. It should be generated as a random data and stored with the cipher text.

It is very important not to forget to add the IV when calling AES function because it significantly increases our security schema. Generally the IV parameter is optional by default in many crypto libraries.

If you would like to explore AES algorithm more I strongly recommend watching this video.

The Master Key is usually a randomly generated sequence of bits, which is used as a key to encrypt and decrypt application data by using AES algorithm. The longer it is, the longer the duration of encryption process is. It can really impact your application performance!

When implementing your security layer for sure you will have a lot of questions. For me they were:

1) Is data stored in Keychain with kSecAttrAccessibleAlways flag also protected?

This class key is protected only with the UID (Unique ID), and is kept in Effaceable Storage.

2) Where to store the Master key?

The encrypted Master Key can be stored for example in Keychain.

3) How long should be the Salt? ❗Updated❗

It depends. In some cases 16 is plenty and in other cases 8 is plenty. And of course remember about decreased app performance when you use a long salt value 😀.

If the user removes their passcode, all the Keychain items with this access restriction will be removed. Use it when your application requires using a passcode. It also prevents the item from being backed up to iCloud or moved to another device.