Today we will dive deeper into a quite unusual topic for us – Objective-C. Don’t be scared though as what we have got for you is a review of Objective-C to Swift tool.

Full disclaimer: we have recently received a full access to the tool from ObjectiveC2Swift Team! Thanks!

We all have some big and small legacy projects written in Objective-C, who doesn’t right? That’s why we have felt obliged to try this tool out and share with community how it worked for us.

All that being said I will stay as objective as possible when reviewing the tool in this subjective post. All the good things mentioned in this article are an appraisal to the team for their great job. All bad things are tips to help developers and for the Swiftify Team to make their product even better!

It’s an online tool. No need to install anything. Code is transmitted securely and is not stored anywhere. Free tier enables you to convert pieces of code up to 2KB. Then there are paid versions that allow you convert whole files and even entire projects. There is also an Xcode plugin. Everything is neat and self- explanatory. No need for any long tutorials. 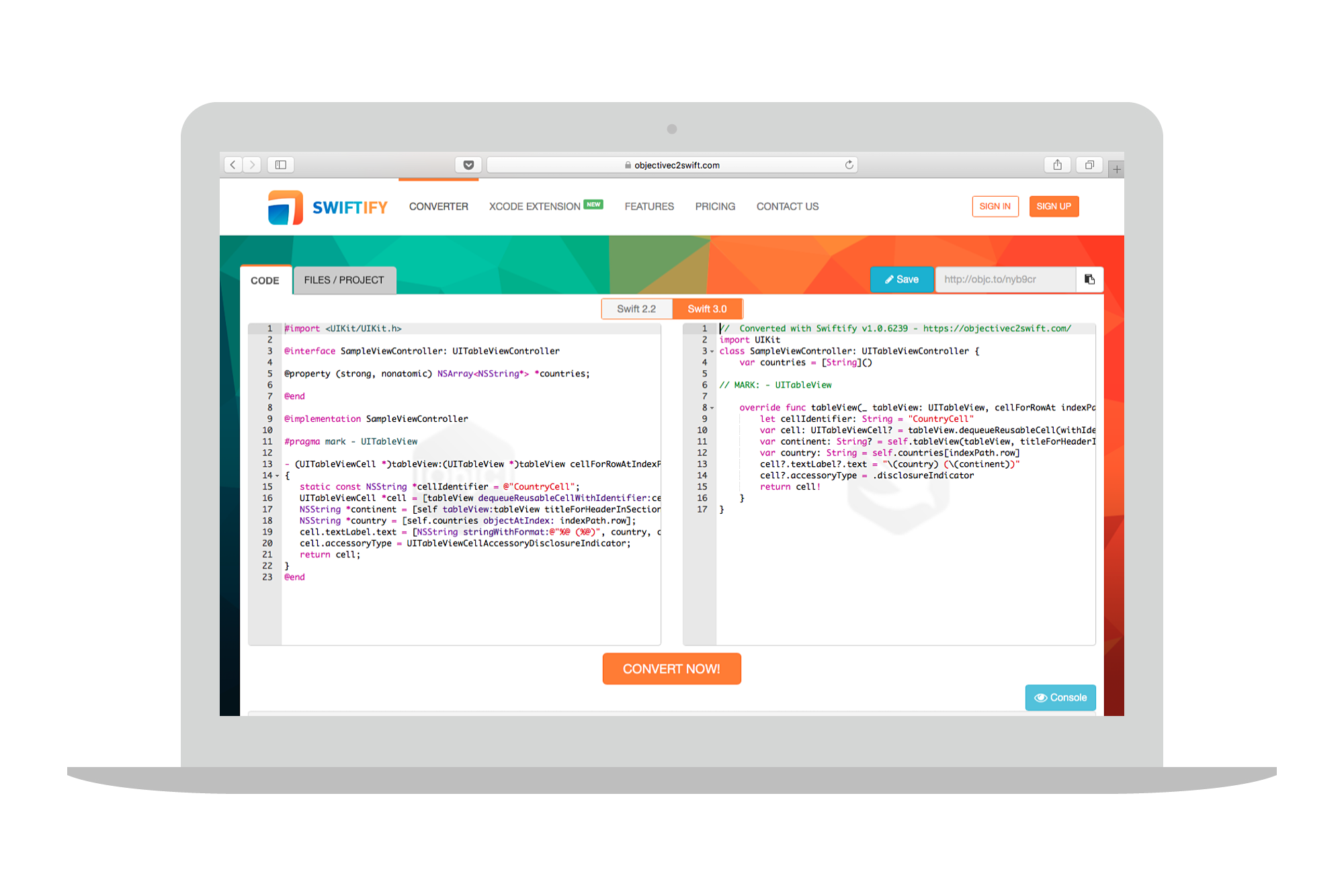 To make a full use of the license we have received, we have converted an entire project. This is a simple demo app to display the Game of Thrones (referred as GoT) data from Wikia’s API. It has some networking, a model and Masonry (a layout DSL, link in references) as Pod. As an additional difficulty it was a piece of code that I have never seen before. The app is small but uses some very specific patterns like Configurator, Loaders and blocks. Seems just enough to test.

NOTE: Objective-C2Swift converter does not promise a perfect conversion. There is a list of supported Swift and Objective-C features on their page.

I have followed this process to test the tool:

As a result we have a GitHub repository with 3 folders. One with the original Objective-C project, another one with converted project and last one with fixes. You can find a link in references.

My first impression after unzipping converted project was:

And it quite is one.

Ok… 12 errors, not bad. Let’s see what impressed me most and what could be done better.

1. It can get an entire file right

The first file that looked into in the converted project was AppDelegate.swift. It was converted 100% correctly. We can probably expect that for simple and small files. You may notice now, that good architecture and KISS pays off.

2. It gets nullability annotations right

The original GoT Objective-C code was using nullability to support Swift interoperability. It is good to know that our tool converts nullable attributed properties to Swift optionals.

I would give another plus for translating readonly property attribute into private (set) var.

In the example below, we get both optional and private setter right.

I was wondering for a while if having let would be a better option here, but quickly reminded myself that there is no such thing as Objective-C const properties . Converter works well enough with Objective-C consts:

As ugly using global vars are, they were converted properly!

It is good to see nice separation of parameters in init functions created from Objective-C initWithXYZ format.

Might seem pretty straightforward but it is nice to see attention to such details.

Although GCD is a framework not a part of Swift language it was converted properly.

I have uploaded the zipped GoT project including fetched Pods directory. Luckily it was not touched at all and left in its Objective-C form.

The GoT project uses Masonry for autolayout purposes. Even in Objective-C Masonry calls felt weird. Having Masonry in Swift project (while SnapKit is available) is even weirder. To make fixes I had to take a look at sample repository Swift-Masonry to make it work.
Kudos for converter for taking it that far!

This one is to echo the AppDelegate one. Custom FavouriteTableViewCell was almost perfectly converted (apart from crazy Masonry stuff and dispatch_once). This file is larger (100 lines) than AppDelegate and still converted nicely.

Do-catch error handling is supported. Some APIs became throwing APIs in Swift and converter wraps it in do-catch, try statement. On the little con side it rendered one these for me in an incomplete state.
It’s probably too much to ask, so just note what may happen:

In swift JSONSerialization is a throwing API. It was wrapped in this way.

All in all, this went into positive side.

The could be better

Now let’s see what may go wrong. It is not written to condemn creators of this awesome tool. Treat it as tips.

1. An entire method may disappear

This goes as number one as I was not expecting that when converter trips over at one of early lines it may swallow the entire method. 41 lines of code were turned into merely 3 and the rest was thrown outside of class scope in broken pieces:

Somehow the word ‘abstract’ that was used throughout the GoT project as a variable name (property in model) or an initializer parameter caused many troubles to the converter. Funny enough neither Objective-C nor Swift have ‘abstract’ keyword.
Could be some internal implementation detail.

Another problem occurred with long init with block parameter. This piece of code gave a really hard time to the converter. Take a look at it:

When trying to reproduce this in the Swiftify web tool I have found that there is a tiny console that shows all lexer, parser and converter messages. In the case of our unfortunate and weird initializer, it showed:

This point is related to previous one. Trying to call such a complex initializer resulted in similarly broken code.

In many places throughout the code there were unnecessary override keywords.

6. Propagates self to method calls

While this is a safe option it is usually completely unnecessary and redundant piece. Still, better working code than optimized and broken.

Some Objective-C patterns are sometimes not converted properly to Swift. That’s not a big deal though. Take a look at nil comparison:

I do not know why, but I was expecting to have it converted when I saw GCD converted properly. The dispatch_once calls have no equivalent in Swift and should be rewritten into some form of lazy vars:

The converter took no attempt to translate this call:

10. Some changes in APIs are not picked yet.

Swift 3 imposes new style of writing. It affected many APIs and made them shorter. I have noticed that converter is not picking that up.

While looking into code we could probably find some more tiny wins and losses. But this trip was long already!

Process Step no 6: Fix it until it works

At this point of my process I was mostly working on strong typing of Set‘s and Array‘s so that everything was more type-safe and Swifty. Other tasks included handling optionals with guard let‘s and similar. It really didn’t take too much time until app was building and running correctly. Neat!

As you may notice project had properties and parameters marked with nullable and nonnull attributes that are there to help conversion to Swift optionals.

There is one more feature introduced in Xcode7 that I wanted to give a try and that was not in our sample project: Objective-C Lightweight Generics.

All in all I am very impressed with the results I was able to achieve using Swiftify to convert the entire project. There are few flaws but most of them are minor. They are picked by compiler and can be self-corrected quickly.

Clearly the fact that the project is building does not mean you are at home. There is still a high probability of runtime errors as the languages are very different. It is necessary to stay focused and analyze the results but all the tedious work and hours of typing are done for you! Now I just wonder whether unit tests could help in this converted project.

I have to admit that this project has a lot of unusual solutions. But only in this way we could get to the limits of the tool and give you some valuable tips and feedback.

It’s been more than a year since this review was created. If you are interested in converting Objective-C codebases into Swift you can follow up with this article from Swiftify.